This is a short episode with a link to these points from the American Foundation for Suicide Prevention in the description. Please share it far and wide with your colleagues.

1. Suicide generally is caused by the convergence of multiple risk factors — the most common being untreated or inadequately managed mental health conditions.

2. An estimated 300 physicians die by suicide in the U.S. per year.

5. Suicide is the second-leading cause of death in the 24–34 age range (Accidents are the first).

6. Twenty-eight percent of residents experience a major depressive episode during training versus 7–8 percent of similarly aged individuals in the U.S. general population.

7. Among physicians, risk for suicide increases when mental health conditions go unaddressed, and self-medication occurs as a way to address anxiety, insomnia or other distressing symptoms. Although self-medicating, mainly with prescription medications, may reduce some symptoms, the underlying health problem is not effectively treated. This can lead to a tragic outcome.

8. In one study, 23 percent of interns had suicidal thoughts. However, among those interns who completed four sessions of web-based cognitive behavior therapy, suicidal ideation decreased by nearly 50 percent.

9. Drivers of burnout include workload, work inefficiency, lack of autonomy and meaning in work, and work-home conflict.

10. Unaddressed mental health conditions, in the long run, are more likely to have a negative impact on a physician’s professional reputation and practice than reaching out for help early.

Please reach out for help if you are hurting and urge those you see hurting to get help. How Effective is Atomoxetine in Children and Adolescents?

Since its FDA approval in 2002, Atomoxetine (brand name Strattera) has become a second or third line option (after stimulants and sometimes after central alpha agonists) for ADHD in both children and adults. Does it work? Listen and find out! ADHD is one of the most treatable conditions in psychiatry if patients adhere to medication regimens. So, why are parents so resistant to stimulant medications and how can we approach these misconceptions? 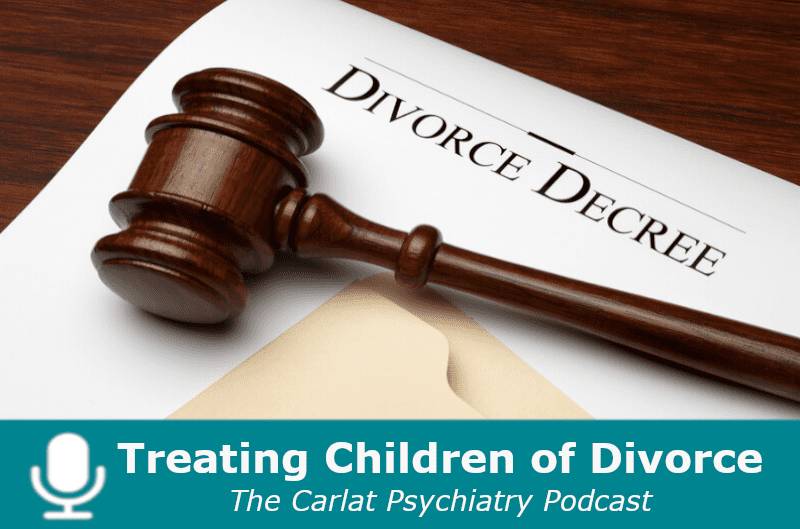 Each year in the US, there are about 1.04 million divorces, affecting about 800,000 children. How can we navigate the complexities of treating a child with divorce? Do Antipsychotics Have Neurotoxic Effects in Youth?

Do antipsychotics have neurotoxic effects in youth? In this episode, we’ll be banging the drum of caution about antipsychotic use in children and adolescents. Moving Beyond ABA: A Positive Development in the Care of Children with Autism

With a growing body of evidence supporting its clinical efficacy and cost-effectiveness relative to traditional ABA approaches, the developmental model is being used with increasing prevalence across the US. Prescribing Psychotropics bridges the gap between the complexities of drug pharmacokinetics and everyday clinical practice, providing clinicians more insight into how psychiatric drugs behave (or misbehave!) once their patients take them.